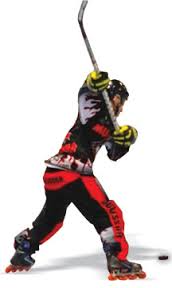 Jorge Rivera is twenty seven and he is a goaltender of Matadors Team. He was born and grew older in Pacoima, CA. Goaltender is the same important position as forward or defenseman that’s why the responsibility for failure and happiness for win should be shared among each other to the same extent.

He studies Chemistry and sometimes he believes he will be the best scientist but than he realizes he dreams of sport career and to be the best player of roller hockey worldwide. Jorge Rivera dreams about being exactly a goaltender that’s why he directs his abilities on this purpose realization. His bodily constitution helps him to respond to hockey pucks pushes.

He is the main goaltender of Matadors. Jorge Rivera has pointed out that roller hockey as well as ice hockey is the game for real men that’s why he has begun to play this game but there is one more reason, he is fond of playing in team, when the team is like a whole organism. Roller hockey is his cup of tea full of unexpectedness and surprises.